As if my last clutch of incubated eggs wasn’t dramatic enough, I had a chick that didn’t pip until day 23 and was still working on hatching by 72 hours.  The hatching process is completely exhausting for these guys and I’ve always went by the rule of thumb “if they’re too weak to hatch, they’re too weak to live.”  Granted these chicks were in my incubator that spiked temperature, I expected none too hatch or at least the ones that hatch to have some mental issues or something.  Surprisingly, all eight were healthy and moved to the brooder.  When I was inspecting the remaining eggs, I saw a small pip and heard weak peeping from inside the shell.  So I placed the incubator top back on, checked the humidity and temperature and went to bed hoping to have my ninth chick in the morning.

When I checked in the morning, the chick had only progressed to making the pipped hole a little bigger.  I could hear faint peeping and the egg was wiggling, so the chick hadn’t died.  That was good.  Plus it had only been about 10 hours from the last time I checked.  By the time 24 hours passed, the chick had made no progress.  Then 48 hours passed, only another small pip beside the first one.  Usually, in my experience, by 48 hours the chick hatches or is at the very least partially zipped out of the shell.  This chick was having a time.  I raised humidity a bit to prevent the chick from gluing in the shell and made sure it was still alive, and it definitely was.  By 72 hours after the first pip, the chick had only zipped about 25% of the way around and was not peeping anymore and was barely moving.  This was when I decided to assist the hatch.

To assist the hatch, you first need to understand the incubation periods and stages of hatching.  TOO MANY  times newbies at incubation and hatching assist a chick to hatch way too soon.  When a chick pips, they may have not fully taken in the egg yolk (which provides sustenance for up to the third day of life) and gives them the boost that they need to start their lives.  A hatch should never be rushed.  Chicks take their good, ol’ time with this.  Think about how exhausting it would be trying to peck your way out of a thick membrane and shell while stuffed into a tiny space and twisted into a pretzel.  Let’s just say it’s no walk in the park.  Some chicks are just not viable enough to survive hatching due to genetic issues, which we don’t want in adult birds anyway.  But others can be malpositioned for hatch or problems can arise from imperfect incubation procedures (which is probably what happened to mine because it seemed like all the chicks struggled).

I normally NEVER assist a hatch, especially in breeding birds, because I don’t want to risk passing on genetic malignancies in my flock.  But I knew these birds weren’t breeding stock and never would be, and I have a soft spot in my heart, especially since these little guys decided to hatch for me when my incubator wanted to cook them.  Mainly, if  the majority of my chicks hatch and two days go by without pips, I do the tap and candle test.  Candle eggs and search for an internal pip.  Chicks pip away at the thick membrane and press their beak into the air cell first.  Then tap the egg shell and hold it up to your ear; you should hear peeping.  With my chick, I already knew it was alive because of the external pip and interval peeping, but it had stopped peeping.  This is by no means an emergency.  As long as there’s a hole and the chick can get oxygen, breathe.

Two rules to go by before assisting a hatch:

BEFORE you even think about touching that shell, make sure you completely understand the hatching cycle and know what you’re getting yourself into.  Make sure you have waited enough time for the chick to hatch on its own.  I will never, ever artificially pip a chick.  If a chick is unable to do that, then they will not be strong enough to survive outside the shell, in my opinion.  People may think this is mean, but a chick that is too weak to hatch will most likely to too weak the rest of its life.

Before assisting a partially pipped chick to hatch, wash those paws!  And wash ’em good.  You don’t need to be sharing cooties with your chick.  Make sure you can see the chicks beak clearly to keep them breathing.  Place the egg on a dampened paper towel under a warm heat lamp and get to work.  Work slowly, peeling small pieces of egg away from the pip.  Do not touch the membrane, just dampen it lightly with warm water.  Watch for blood vessels in the membrane, I cannot stress this enough!  If the membrane is peeled from the chick and the blood vessels have not contracted and “dried” the chick can bleed to death.  If you see bleeding, wet the membrane and stop what you’re doing immediately.  Place the chick back in the incubator for at least 2 hours and see if the chick will hatch on its own.  If there’s no bleeding, gently peel back part of the membrane to allow the chicks head to fall out of the shell.  By this time, the chick should be able to kick itself out of the shell.  I wet the membrane and place my chick back in the incubator with half its shell.  It kicked the shell off in about 20 minutes.  I figured giving it something to do would strengthen it, rather than doing everything for it.

And now I have nine cute naked necks. We named the hatch assisted one Tiny because this chick is a fourth of the size of the others. It’s very energetic but occasionally acts like nobody’s home upstairs. My mom took to Tiny immediately and he/she is now her little baby. 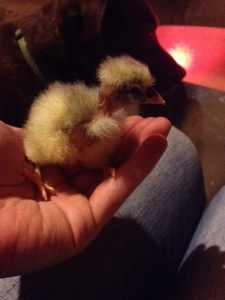 Tiny in my hand. He/she is about 1 week old today while the brothers and sisters are going on a week and a half.

I wrote this hoping to help people understand hatching a little more. I’ve seen too many people jump in to help and actually kill their chicks rather than help because they intervened too soon. Do your homework and understand the incubation and hatching processes. The standard 21 days is just a guideline, as yours may hatch a few days earlier or later, like mine did. Just remember: if they can breathe, it’s not an emergency! Happy hatching!

Tiny on the far left with the Lavender Orpingtons.

Take A Look Around…